And that’s a wrap! Facebook’s annual F8 developer conference concluded today, and there were 4 things on the agenda; Connectivity, AI, VR & AR.

Facebook’s Chief Technology Office, Mike Schroepfer, kicked off his keynote speech addressing Facebook’s connectivity efforts, by saying that their “goal here is simple. We want to figure out figure out how to connect the 4.1 billion people around the world who aren’t currently connected to the internet.” 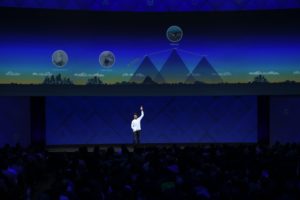 Facebook are currently investing in radical technologies (Terragraph, mm-Wave, Aquila) in the hopes of reducing the cost of delivering internet access around the world – designing a multitude of technologies for different use cases, “which are then used together to create flexible and extensible networks” (Facebook).

Building on from Day 1, AI was a hot topic again today – Schroepfer addressed Facebook’s future plans for AI saying “we want to build truly intelligent systems that understand the world and are useful for all.”

In addition to the new Camera Effects Platform, part of Facebook’s steps in getting there, is to incorporate facets of perception, understanding & learning, prediction and planning into AI technologies, to better understand the world around us. 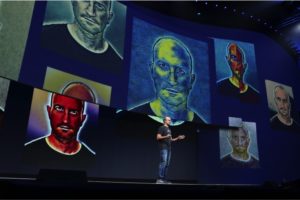 Facebook’s Applied Machine Learning Director, Joaquin Quiñonero, announced that they would be open sourcing Caffe2 – a framework to build and run AI algorithms on a phone – and building partnerships with Amazon, Intel, Microsoft, NVIDIA, Qualcomm, and others.

Facebook is investing in VR across mobile and PC hardware, PR, research, content, platforms and software while trying to drive adoption by building systems which are easy to use and low cost (Gear VR).

An example of this investment is in the ability for users to capture immersive 360 videos. To do so (on an affordable scale), Facebook launched their Giroptic iO 360 connected camera – which allows users to plug into their iOS or Android devices and instantly share or live stream their 360 videos or images immediately on Facebook. 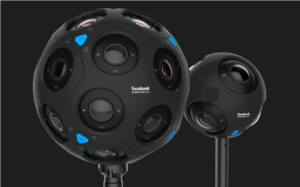 The Surround 360 X24 and X6 were designed to maximise pixel overlap, ensuring that a viewer was not locked into the constraints of the camera that the image/video was taking by.

Building on from Day 1’s wrap up of the new Camera Effects platform and its place in AR, Chief Scientist of Occulus Research, Michael Abrash spoke of their decade-long investment in technologies to reach full AR.

Facebook’s 10 year plan is to establish full AR, “where augmentation enhances your vision and heating seamlessly, while being light, comfortable power-efficient and socially acceptable enough to accompany you everywhere” (Facebook). 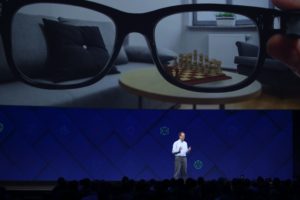 Virtual computing was the main talking point (where the idea of the smartphone will basically be killed off). The idea is to develop a pair of glasses that are able to show virtual images overlaid on the real world that will become as much a part of everyday life as the smartphone is today.

Boy – haven’t they been busy.